The popular photo that shows Haitians being treated as runaway slaves in the border town of Del Rio pulled the covers off the Biden-Harrison immigration policy towards Haiti. In fact, for months US mounted border patrol officers had been whipping and rounding up Haitians under the orders of the White House. The human rights of these refugees are violated again when they are hastily deported without official INS hearings to determine whether it is safe to return thousands of them seeking asylum in the United States. The State Department and mainstream media conceal the devastating events that caused over 14,000 to amass under bridges.

These are some reasons.

Last July elected Haitian president Jevenel Moise was assassinated by a team of twenty-eight foreign mercenaries. Just hours later it was discovered that two of the captured assassins were  Americans, likely trained and dispatched by the notorious School of Americas. Rebranded the Western Hemisphere Institute for Security Cooperation, WHINSEC is funded by US taxpayer dollars and is known for its stellar record of assassinations and coup d’ etats against uncooperating non-European leaders and countries.  Moise’s murder put the country in turmoil, as Haitians found themselves without a head of state.

Just weeks later another tragedy befell Haiti. A 7.2 magnitude earthquake up-ended this tiny Caribbean island nation of 11.5 million, killing 2,248 and injuring 12,000 others. Yet, Congress and the US media quickly turned its attention away from this former slave colony to wholeheartedly supporting the evacuation of fleeing Afghan immigrants who cooperated with the US invasion of Afghanistan. It must be noted that no member of the Congressional Black Caucus rushed to the border to protect the rights of Haitian refugees as the late Rep. John Lewis and other CBC members did on behalf of Hispanics being mistreated by immigration officials.  After all that has happened,  high profile Congresswoman Sheila Jackson (D-Texas) only had to say on her official website that she believes in “increasing the diversity of immigration from parts of the world that have been historically underrepresented such as the Caribbean, Africa or treated unequally such as Haiti.” Apparently Jackson and other nervous lawmakers have adopted a hands-off Haiti strategy to strengthen their personal outcomes during the quickly approaching 2022 midterm elections.

But, White House and congressional abandonment is causing great consternation among international relations observers of African descent and other humanitarians because they see it as a blatant act of racism.

Many policy observers believe this bias and animosity towards Haiti are fueled by a centuries-long grudge that the US government and other European countries are holding ever since former enslaved Africans won their freedom from France in 1804. At the time, and up to our time, Haiti is the only nation in history established by former slaves who successfully revolted against their oppressors. Since that time the US and France have taken unceasing revenge upon Haiti by hosting dozens of coups and acts of insurrection to continually keep this county weak and destabilized. Moise was just the latest victim.

As predicted, the recent coup and quake created a humanitarian crisis that points blame at every branch of the US government.   Last week the Department of Homeland Security accelerated its pace to deport Haitian refugees trapped under unsafe bridges in a South Texas town without enough food and water. The Haitians asylum seekers who have been denied entry into the US have been living in unsanitary conditions for months because the Mexican government also refuses to grant them political asylum as they do all other immigrants fleeing imminent death or racial violence. 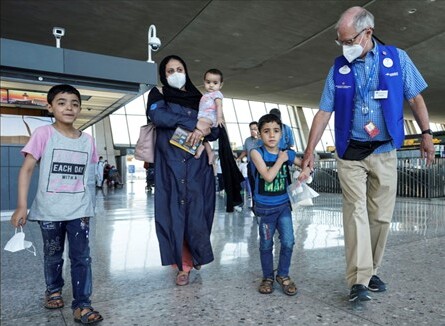 The current treatment of Haitian refugees confirms the long-standing immigration policies of the United States. For example, in 1997 the US Congress enacted the Nicaraguan Adjustment and Central American Relief Act. NACARA opened the door for Nicaraguans and Cubans to become legal US residents and gave Central American and East European asylum seekers easier access to the United States. Yet Congress chose to specifically exclude Haiti from NACARA. In addition, the U.S. State Department rolled out the red carpet for Afghan immigrants who were given Special Immigrant Visas with little or no screening. At least 37,000 SIV holders were flown first class to Michigan and other states where they were greeted with tons of cheers and pampered with gifts. Afterwards they were escorted to posh hotels and facilities until the Department of State finds permanent subsidized homes for them. And last Sunday, according to the Huffington Post, Biden and Democratic lawmakers unsuccessfully tried to pass a spending bill that ties in an immigration reform bill that would give 11 million Hispanic ‘Dreamers’—as they are affectionately called—eventual U.S. citizenship.

To be sure, African Americans are not against Afghan refugees or other ethnic groups seeking entrance to the United States. But many wonder why Haitian refugees are not treated delicately in the same fashion as non-Blacks are, and question why there is not a national outcry for the horrendous treatment of Haitians.
Mirlande, a Haitian immigrant only willing to give her first name, summed up the different treatment of Afghans and Haitians. “We been living at this border for months, scavenging for basic necessities of life,” she said. “But no one is in a hurry to help us out.”